This article is published under our technology and society series.  Technology has disrupted multiple facets of our life and continues to shape the human experience. We explore how technology continues to transform society through commerce, culture, and media.  Drawing upon the research of Lawrence Lessig, and his book Free Culture, this article explores contemporary challenges associated with internet’s role as an emerging cultural institution. 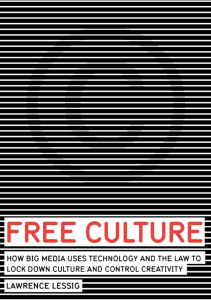 In 2000 a landmark statistic was released indicating that fifty-two percent of the U.S. adult population accessed and utilized the internet on a consistent basis. Nearly two decades later, and that number has increased to ninety percent. With its ubiquitous nature, the internet has not only impacted how we communicate but has also embedded itself within the fabric of our culture. Similar to how the eight-track, boombox, and Walkman have left their mark on an entire generation, so will the internet, specifically through content sharing websites such as YouTube and Reddit.

The emergence of the internet and other information communication technologies revolutionizes how we connect with one another. No other technology since the development of broadcasting in the early twentieth century has proven so disruptive to the political, economic, and social spheres than the world-wide net. As radio and television democratized film and music to be enjoyed by the masses, the internet has democratized the creation and dissemination of content. For centuries, physical and financial considerations served as de-facto barriers in regulating individuals from generating, reproducing, or sharing media. However, the rapid pace of digitization has significantly lowered the expense of sharing and reproducing media to the threshold where financial cost is now a negligible barrier. As the current generation has embraced the open architecture of the internet to both consume and create media, several legal considerations have emerged. While legislators and policymakers have crafted legislation to accommodate new forms of innovation, such as the advent of flight or the development of wireless transmissions, copyright law reforms have remained stagnant in the digital age. In his book, Free Culture, Lawrence Lessig argues that the existing public policy towards copyright is no longer relevant and is not benefiting both content creators and content consumers. Through historical examples, Lessig illustrates the hazards of approach copyright with the same context as traditional property rights.

To understand the issues with contemporary copyright legislation, Lessig draws upon its historic roots in property rights. Copyright first emerged in England in the mid 17th century as a “right to use a particular machine to replicate a particular work… It did not control any more generally how a work could be used” (Lessig, 87). However, by the 1700’s, English booksellers were seeking to protect their craft from growing competition and successfully lobbied parliament to codify copyright legislation into the Statue of Anne. Although “the Statute of Anne granted the author or “proprietor” of a book an exclusive right to print that book [however] the law gave the bookseller that right for a limited term after which the work would then be free and could be published by anyone” (Lessig, 87). With a legal monopoly secured, a small consortium of booksellers consolidated power and prevented competitors from entering the market with lower cost alternatives. When the exclusivity of the copyrights expired, the booksellers turned to the courts to perpetuate their ownership. With the absence of positive legislation, the courts followed common law doctrine on property rights. While initially the courts ruled that common law granted owners the right to bar publication (similar to how land owners can prohibit trespassers), the case was appealed to the House of Lords, which ruled in favor of fixed limits of exclusivity. In establishing a fixed limit on ownership, the House of Lords opened the opportunity for competition, which lowered the barrier for citizens to access information and literature. In addition to increasing the accessibility of information, the decision also ushered in the concept of “public domain.”

For Lessig, the public domain represents the most suitable compromise for balancing the interests of copyright holders with those of consumers. At “the end of a copyright term, a work passes into the public domain, during which no permission is then needed to draw upon or use that work…essentially creating a lawyer free zone” (Lessig, 24). Lessig notes the public domain strikes a balance for incentivizing the development of creative works and providing the public with the ability to use it for their own creative expression. To convey the importance of the public domain in contributing to our culture, Lessig uses the example of Walt Disney. Disney’s classic cartoon, Steamboat Willy, and other famous movies including Pinocchio and Cinderella, were conceived with elements inspired by the creative works of others. As Lessig observes, “all of these cases, Disney (or Disney, Inc.) ripped creativity from the culture around him, mixed that creativity with his own extraordinary talent, and then burned that mix into the soul of his culture” (Lessig, 24). Ironically, while Walt Disney benefited creatively from accessing works in the public domain, his namesake company, Disney Inc., has successfully petitioned congress to extend the duration of exclusive ownership rights, thereby limiting the number of works in the public domain. From “1790 until 1978, the average copyright term was never more than thirty-two years” (Lessig, 24). However, congress has acted several times to extend copyright ownership, which now generally encompasses the life of the author plus 70 years following their death. This extended ownership period is reminiscent of how the booksellers in England leveraged copyright laws to stifle competition. Just how the House of Lords abolished the bookseller monopoly, Lessig is appealing to the United States Government to adopt similar “common sense” reforms in regards to copyright.

In the past, U.S. legislators and policy makers adopted common sense reforms to adjust legislation to account for technological innovation. In appealing for the creation of these common-sense changes, Lessig points to the advent of flight. As Lessig notes, when aircraft began to populate the sky, “American law held that a property owner presumptively owned not just the surface of his land, but all the land below, down to the center of the earth, and all the space above, to an indefinite extent, upwards” (Lessig, 1). According to the law, every aircraft navigating the skies without the express permission of the property holders below were trespassing. In 1945, two farmers, Thomas Lee and Tinie Causby, sued the federal government for trespass, when aircraft from a nearby airbase disturbed his chickens. The Supreme Court agreed to hear the case, which challenged centuries of established precedent on property rights. While Lee and Causby contended that the aircraft were trespassing on his property, which amounted to an unconstitutional “taking,” the Supreme Court rejected this argument. In writing the majority opinion, Justice Douglas passionately argues that “[The] doctrine has no place in the modern world. Were that not true, every transcontinental flight would subject the operator to countless trespass suits. Common sense revolts at the idea” (Lessig, 2). Through adjusting the prevailing jurisprudence to accommodate technological change, Justice Douglas allowed new form of innovation to flourish.

Applying common sense legal reforms, allowed the airlines to grow and innovate, democratizing travel to far flung distances which were previously out of reach for most citizens. Lessig argues that the same common-sense reforms in the context of copyright reform, would democratize creative works in an era where users are both consumers and creators of new content. Through drawing from historical examples, Lessig makes a compelling case for the return of limited duration copyrights, expansion of the public domain, and permissible usage of protected works for noncommercial purposes.